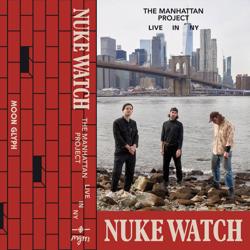 Eight years ago, we said very nice things about the Beat Detectives’ debut because it was a top-drawer record. The Nuke Watch line-up for The Manhattan Project – Live In NY comprises Chris Hontos and Aaron Anderson of said Beat Detectives (Hontos equally of Food Pyramid), so too Eric Timothy Carlson of Radical Cemetery. These three tackle fairly different takes on electronically-influenced psychedelic jams and Nuke Watch synergises all of their components to come up with something simultaneously the sum of their parts and yet also something entirely new.

This meandering result thus picks up where Nuke Watch’s RVNG Intl debut left off, largely in the leftfield court of dub wizards Sun Araw, but also on another plane entirely. Split into two half-hour improvised suites (“Afternoon” / “Night”), The Manhattan Project was laid down live, synths, keys and samplers delivering a bubbling, chirruping odyssey full of shape-shifting rhythms and undulating grooves. Organic pulses and rimshot ripples meet glottal oscillations and free-form electronics, squelchy percussion and clipped beats. Pipes and ambient drop-outs add an edge of paranoia to an otherwise upbeat dose of optimism during the “Afternoon”, this progressive arrangement going full fusion to herald the onset of the “Night”.

A suitably chilly, lonelier affair during its opening exchanges, “Night” introduces parped drones alongside a spoken sample, the recording being made the summer of COVID 2020, the words haunting the bars like a memory of the humanity that used to inhabit NYC’s empty streets. Flashback shimmers and digitally corrupted chimes shower the rhythms in rainbows of light, tempos ebbing and flowing, leading to a dark midsection with echoes and worries, fragmented voices, and a range of emotion and textures. An apt way perhaps of conjuring our shared existence these last 12 months, nagging repeats, needling padwork, serene synths and oddball FX taking you on a voyage when travel was all but impossible, The Manhattan Project an out-there soundtrack rich in invention that sculpts a new NYC of the near future.

~ The Manhattan Project – Live In NY was released March 25th via Moon Glyph.~