Neil Meehan’s Albums Of The Year 2020 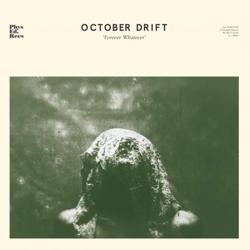 The year 2020 will be remembered the world over, for many reasons. Musically, it saw countless musicians in a unique position, with lots more time, plenty to write about, and – in many cases – a sudden loss of income and security. There was also the bittersweet news of Denise Johnson, so often lending her wonderful voice to the work of others, releasing her long-awaited solo album, before her time was tragically cut short, before she could see it hit the charts. Throughout these twelve months of turmoil came some great music. Here are some of my picks:

2020, as it did for so many, saw October Drift have to cancel swathes of live dates. Although January did at least see the band finally release their debut LP, after years on the live circuit. The incessant energy of each show is captured on here; the exhilarating power of ‘Cherry Red’, ‘Oh The Silence’ and title track ‘Forever, Whatever’ drive through the best bits of grunge and rock onto tape; the quiet subtlety of ‘Naked’ providing light to the shade. The year ended with news that album two is nearing completion – here’s to 2021.

Can a record recorded in the 90s be included in the roaring twenties? Never released as a long-player, Mansun’s Paul Draper stated this was the record to go alongside Six. Or potentially instead of, if the label had insisted. The tracks saw life on various Mansun EPs, but were finally brought together and sequenced as initially planned for Record Store Day 2020, resulting in the best collection of songs released this year.

Improving on Holiday Destination was a tough ask, but this record more than delivers. Opening track ‘Club Cougar’ gets straight in the groove, both musically and lyrically, and Shah relents on neither throughout. Bonus points for making the brass section sound so brill. No mean feat.

4. Vennart – In the Dead Dead Wood

A regular in my end-of-year lists recently, Vennart released Dead, Dead Wood suddenly in November. No media, no promo, no airplay, the original pressing sold straight out. As did the second, and then the third. The genre-hopping of its predecessor has been reduced to a more focused offering across these 8 tracks, Mike Vennart and co presenting a dark, enchanting trip across the post-rock landscape.

This Edinburgh duo first appeared on my radar at the 2016 Liverpool International Festival of Psychedelia. Four years later, and their debut album captures the brooding, atmospheric, psych-rock of their live show. Has man landed on the moon? Who cares – Man of Moon have landed.

6. The Strokes – The New Abnormal

In the near 20 (?!) years since Is This It, Julian and co have moved steadily from the garage into the lounge, slowing the pace, minimising the drums, but maximising the quality; Casablancas’ voice and Albert Hammond Jr’s guitar both sounding so simple, so effortless, yet so flawless. Comfortably their best record in years.

It has been 8 years since his 8th album, during which Damon Gough, AKA Badly Drawn Boy, has publicly gone teetotal, and reinvented his social media presence, now regularly engaging with fans on music, as well as his weekly domestic bin duties. This seemingly new zest is reflected in Banana Skin Shoes, from the off upbeat, positive, reflective and brimming with great tunes.

The third solo album from Stein is as strong as any of her career (which includes five Howling Bells records). Picking at the tremelo guitar, releasing that signature vocal, the melodies throughout befit the record’s themes, written in response to the loss to Stein’s late father.

3-piece comprised of members of Interpol, The Walkmen and Fleet Foxes, which take the best bits of each to make a sound all of their own.

Having been drawn in by the strength of the ‘Holy Show’ single, I soon realised the record was packed with more of the same. A melodic, indie-pop gem from the Dublin four-piece.

Intriguingly, more again forever is not what you get from Courteeners. The band’s 6th album is yet another leap musically, and boasts some of Liam Fray’s best tunes since their debut.

Gone are the orchestral sweeps or electronic experimentation of previous records. “Make some room for the afterlife” sings Jesse Tabish on opening track ‘Sound of Violence’, setting the tone for an album of raw, dark, country-fused alt-rock.

The title says it all; a record oozing hooks, attitude, cool, and their best songs yet.

Ex-80s Matchbox bassist Sym Gharial recruited a host of mates (from Idles to The Clash) to add their vocals to his blasts of Industrial-electro-punk. As hard-hitting as an album about race and suicide should be.

The debut solo album by Radiohead’s Ed O’Brien, and hopefully the first of many. Inspired by Brazilian carnivals, Earth manages to sound loose and carefree yet perfectly, delicately crafted.

Evolving from their early post-punk sound, at times into full-on rave, WMC continue to surprise in all but the quality of their music – which remains consistently high.

Not content with releasing 4th album The Joy of Return in March – and making the UK top 10 – the four-piece used lockdown to write and record its follow-up. Socially-distant writing may have toned-down the synths and atmospherics, but has not lost any of the song-craft.

Recent single ‘The Keeper’ is Blossoms’ best song yet, and is not out of place on this collection of pop songs, all founded on mesmeric bass and irresistible melodies.

Having taken on the role of Listening Party supremo, and overall lockdown hero, the Charlatans frontman’s day job could be overlooked in 2020. Which would be a great shame, as his solo work gets better with each passing record, I Love the New Sky awash with East Coast nuggets.

Expanding on their Mercury-nominated debut, Walking Like We Do sees the London four-piece unleash a set of magical melodies.